After I finished my skirt I had a lot of left over blue lining and I was wondering what to do with it. I needed some new pyjamas and after a bit of googling I was convinced it would be really easy – oh how I was wrong….

What  all these tutorials suggest is that you stretch out a pair of pjs that fit comfortable and trace around your pattern. Then cut two legs and connect the left side to the right and the crotch and the front to the back down the legs – add hem and elastic and you’re sorted. Like this:

But I found out it can go horribly wrong!

First I made things more complicated for myself by deciding I wanted pockets (I do love pockets) and so I decided to use the same method (and even the same pattern pieces) that I had with my skirt. So it was completely my own fault but I did make that a bit more complicated because rather than having one piece for each leg I now needed an outside leg seam as well as an inside leg seam to give me somewhere to put my pockets.

So I had four leg pieces now. But they should all be that same straight forward shape. However pockets continued to give me complications…. because the pockets I used opened up at the top I now needed a waste band. And I didn’t have enough left overs to make a waste band so I used my other left overs and had a flowery waste band and I thought that looked so cute I should do a similar strip at the bottom of the legs as well. So rather than two pieces to assemble I had: 2 for each pocket, 2 for each leg: 2 for waste band (front and back), 2 to act as leg cuffs (is that a word… you know what I mean). So I made it massively unnecessarily complicated by having 10 pieces rather than 2. I then added to my unnecessary complications by continuing my seam obsession – I flat felled the crotch (this was actually really easy with the thinner cotton and I love how it looks); I used a simple standard straight seam on the outside leg and then bound the raw edges (with blue satin!!!); for the inside leg I used a pocket seam (I also loved this – so much easier than I was expecting).

But as well as being unnecessarily complicated… the also just did not work as functioning trousers. So to save others from my late night horrors…. here is my guide of how NOT to make pyjama trousers: 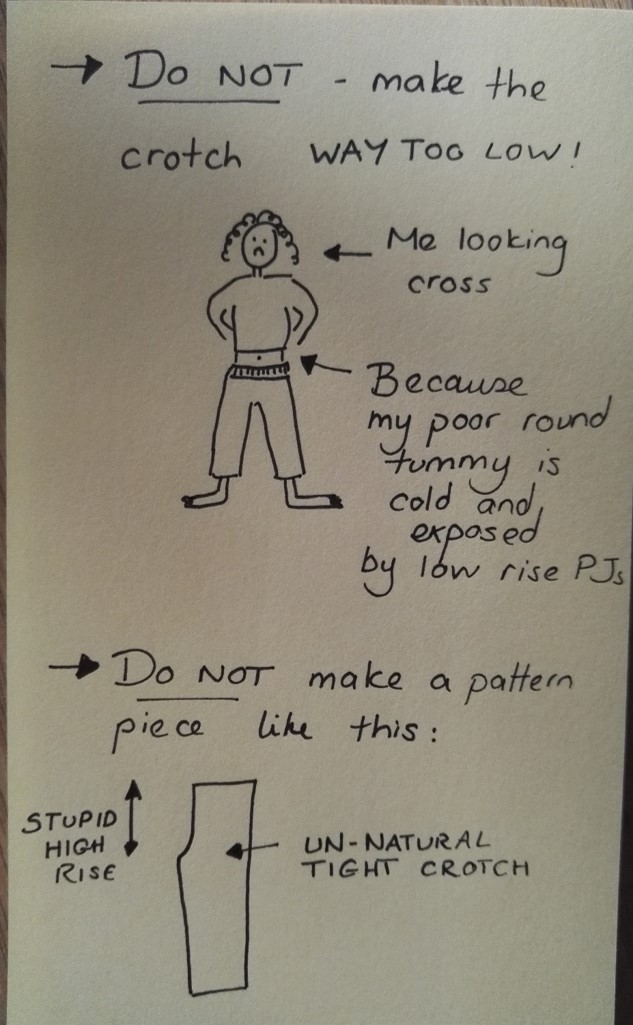 One thought on “Project 3: Pyjama trousers…. sounded so easy… and went SO WRONG. Leading to a Tutorial in how NOT to make PJ trousers (you’re welcome :) )”